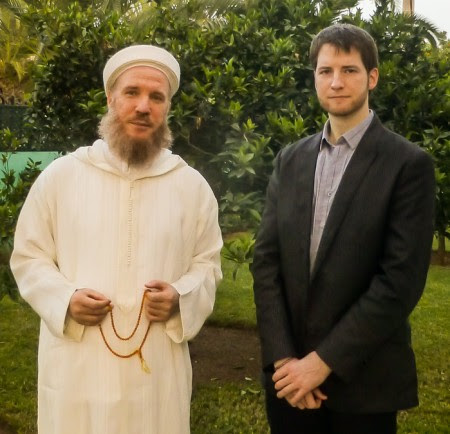 
In a previous post I revealed that Sheikh Muhammad al-Ya’qoubi was elected as the first non-Ikhwaan-linked religious figure of the National Coalition. This event did take place, even though his followers were disappointed to discover that his tenure would not see the light of day, as his appointment was subsequently canceled at the very opposition conference in which his participation was to be announced. This is not the first time that he has been excluded from the opposition. His name has previously been on draft lists of Coalition members, but deleted for unknown reasons. It raises many questions when an influential figure (but one that cannot compete with the funding of the Muslim Brotherhood) is excluded in favor of admitting other, largely unknown individuals. Despite being blocked again by Ikhwaan-aligned figures, his influence is not going to disappear. For those curious about his background and views, I believe it will be useful to publish here the full interview I had with the Sheikh (April 2013; Rabat, Morocco; in English). Our entire conversation is provided below, but it is quite long, so at the outset I list a few of the key topics covered within it:


Sheikh Muhammad Abu al-Huda al-Ya’qoubi is a leading religious leader of Damascus. A descendent of the Prophet Mohammed and a Sufi of the Shadhiliyya order, he is a key figure of Syria’s Sunni ‘ulema [the class of religious scholars with the traditional role of interpreting Islamic scriptural sources; the singular is 'aalim]. In the Syrian conflict, Sheikh Ya’qoubi is notable for his role in giving some important sermons critical of the regime, early in the conflict from mosques in Damascus, and for being the first sheikh to issue a fatwa against the regime, for its violence against demonstrators and civilians. An Arabic article discussing that fatwa was published here.
Jawad Qureshi, a PhD candidate at the University of Chicago’s Divinity School, has written an important account of the ‘ulema’s actions and reactions during the first year of the uprising. The article (“The Discourses of the Damascene Sunni Ulama During the 2011 Revolution”) offers insight into the backgrounds of significant ‘ulema figures and analyzes excerpts from their important speeches. Qureshi also discusses Sheikh Ya’qoubi’s role as the first ‘aalim to take such a pronounced position of denunciation of the regime. I have made the paper available here.
Fluent in English and Swedish after studying and spending time in Sweden, the UK, and the U.S., Sheikh Yaqoubi is also an important figure for Islam in the West, collaborating with such figures as Hamza Yusuf (who also studied under Yaqoubi) in producing Islamic literature for Western readers. He has his own website where he offers materials teaching his understanding of Islam.
A sense of his understanding of Islam can be found in his recent statement condemning the Boston Bombing:
——————-
As Muslim leaders representing Islam and Muslims worldwide, it is our duty to speak up and denounce terrorism and terrorist actions regardless of who is behind them. However, it becomes more incumbent upon us to do so when it is done in the name of Islam.
We strongly condemn the most recent terrorist attack in Boston, USA, and offer our sympathy to the victims. These types of attacks are but signs of cowardice and self-defeat.
Our goal as Muslims is to improve the image of Islam and establish a better understanding of our religion, culture, and history. Unfortunately, this attack, if it turns out that Muslims are behind it, will definitely be detrimental to this lofty goal.
Islam brings about mercy not cruelty, and spreads love not hatred. According to our Holy Prophet, peace and blessings be upon him, a true believer is “He who does not harm anyone, neither with his tongue, nor with his hand.”

——————-
He also condemned the recent killing of British soldier Lee Rigby.
This approach informs his role in the Syrian Uprising, and the kinds of fatwas he has issued regarding the dilemmas of war and the behavior of belligerents. Of fatwas he has issued during the uprising, here are 11 examples:
1 – حكم قتلا لأسرى من عساكر جيش النظام الأسدي في سوريا
2 – فتوى تحريم خطف الأجانب
3 – حكم عمليات تفجير السيارات الاستشهادية
4 – فتاوى للثورة: حكم استئذان الوالدين للجهاد
5 – فتوى تحريم قتلا لأسير في الإسلام
6 – حكم الجهر بالتكبير في المساجد
7 – حكم التفجيرات إذا قتلت فيها عائلات المجرمين من الضباط
8 – حكم تفجير سيارة بضابط وأولاده
9 – حكم محاربة النظام في المناطق السكنية
10 – حكم وضع الألغام في المناطق السكنية
11 – فتاوى للثورة: المرأة التي فُقد زوجها في أحداث سورية ما ذا تفعل؟
These are: 1) Legal ruling on killing POWs of the army of the Assad regime in Syria; 2) Fatwa forbidding the kidnapping of foreigners; 3) Legal ruling on suicide car-bombing; 4) Getting the permission of parents before going on jihad; 5) The prohibition of killing prisoners in Islam; 6) Fatwa on saying “Allah-u-Akbar” aloud in mosques; 7) Ruling on the use of explosives to kill army officers when their family members might be killed with them; 8) Ruling on detonating a bomb in the car of an army officer who has his children with him; 9) Ruling on fighting the regime in inhabited areas; 10) Ruling on using land-mines in inhabited areas; 11) Ruling on a woman who loses her husband and requests a divorce.
I have made available a .pdf of the full text of these fatwas in Arabic here. There are English translations of a few of them around the Net.
Sheikh Ya’qoubi’s fatwas influence those Syrian rebels who are Sufis and moderate Sunnis. He and 60 other leaders and sheikhs have formed a coalition of Sufi rebel groups, called Movement for Building Civilization (تيار بناء الحضارة), which they intend to have operating soon out of an office in Jordan. A draft document (Arabic) containing the principles of the movement is available here. Rebel groups wanting to join this coalition must sign and agree to adhere to the principles, some of which include: 1) Removing the regime while not destroying the state—protecting public institutions; 2) The rejection of revenge, retaliation, and execution during the uprising: keeping the trials of war criminals for after the collapse of the regime and the establishment of a new government; 3) After the collapse of the regime, rebel groups should cease to carry arms and their members should return to civilian life or join the national army; 4) All ethnic and religious communities are to be defended as equal citizens under the law; 5) No ethnic or religious group is to be held responsible for the crimes of the regime; 6) A future Syrian government must operate according to a separation of judicial, legislative, and executive powers; 7) The future government must be a democracy of political multiplicity and the 1950 Constitution should be in effect during the interim period until a new parliament is elected and a new constitution is agreed upon.
Many rebels and sheikhs in Syria are becoming frustrated with Islamists as the sole option, and are reaching out to the ‘ulema, but without funding the ‘ulema are limited in offering anything beyond ideological support. One young sheikh, ‘Omar Rahmoon, has established his own rebel force in consultation with Sheikh Ya’qoubi on the ethics and principles that should rule the group’s tactics and approach. I have put the founding document for that group (حركة أحرار الصوفية الإسلامية – Movement of the Free Sufi Muslims) here.
A few observations on the interview.
1) Sheikh Ya’qoubi often uses the word “we.” Sometimes this is a self-referential use of the “royal we,” other times he is speaking from the perspective of the segment of Sufi/Sunni ‘ulema who share similar positions to his.
2) I hear a tension in Ya’qoubi’s narrative between: “Islamists have little presence, power, popularity as they do not represent the outlook and religion of Syrians;” and, “Islamists are a grave threat controlling everything, having risen to prominence through targeted, external support.”
3) Sheikh Ya’qoubi recognizes that this is a war, and that Salafi-jihadists pose a grave threat to the future of Syria. He does, however, make the statement that “the whole conflict will be solved by him [the president] being removed.” For myself and many others, this conflict is about far more than the leadership of a single individual; it represents a much deeper struggle about the future definition of the state. Simply removing one person, even one as symbolic as the president, will not likely provide the solution that can put an end to it. That doesn’t mean he should stay, but it shouldn’t be ignored that his departure may mark a beginning, rather than an end, to a larger struggle for regional identity involving contenders from Iraq to Lebanon. As Syria Comment reader Observer framed it: “We are… witnessing the death of Sykes Picot, violently, and with a messy outcome, and with pure sectarian hatred.”
4) It’s obvious that the vast majority of Sunnis will not view Grand Mufti Hassoun’s call for jihad as legitimate, but I believe this is more about one’s positioning within the conflict, and less about any technical or doctrinal problem with the call itself. The concept of “theology” (as typically understood in the West according to a Christian framework) doesn’t correspond to an exact equivalent in Islam, but I felt comfortable using the word in this discussion after Sheikh Ya’qoubi used it first. I pressed the Sheikh about the issue of the Grand Mufti’s jihad only because I wanted to understand if there was a particular religious basis for claiming it was invalid, rather than the mere fact that it serves the side of the opponent.
5) In a recent interview, the Economist asked some Nusra fighters about their position on the Alawi minority community. The response was:


Allah knows what will happen to them. There is a difference between the basic kuffar [infidels] and those who converted from Islam. If the latter, we must punish them. Alawites are included. Even Sunnis who want democracy are kuffar as are all Shia. It’s not about who is loyal and who isn’t to the regime; it’s about their religion. Sharia says there can be no punishment of the innocent and there must be punishment of the bad; that’s what we follow.

At issue here is the notion in Islam that the apostate (someone who leaves Islam), must be killed. This is not a position held only by extremists; it is the mainstream position considered correct by the majority of Sunnis. The portion of my conversation with Sheikh Ya’qoubi dealing with the Alawi community is important, because he asserts that they are not apostates.

Posted by Muqabalah at 7:00 PM